Star Wars: The Old Republic is an MMORPG released on December 20 2012. In many ways it’s similar to every other MMORPG you played: players generally hate any kind of comparisons with other similar games, but SWTOR doesn’t bring anything revolutionary to the genre. That being said, it’s a really excellent and fun game and I suggest everyone to give it a try.

This post will help you figure out a few basics when it comes to Star Wars: The Old Republic, so if you’re planning on getting into this game I suggest you read it. 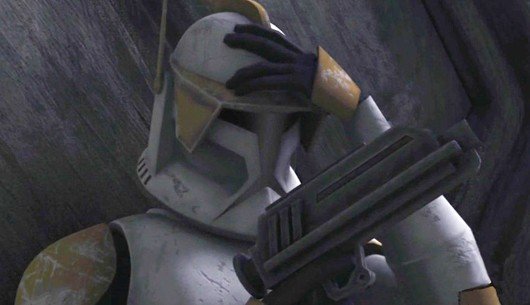 You’ll often hear The Old Republic is a story-driven game. Bioware (the developer) focused on the storyline, presented to us by amazingly detailed class quests and frequent cutscenes. While some games are focused on PvE or PvP, SWTOR has a bit of both, but it’s strongest point is the exciting storyline set in the well-known Star Wars universe. There are voiceovers for every quest and NPC in this game and the choices you make while doing quests can impact your characters experience later on. 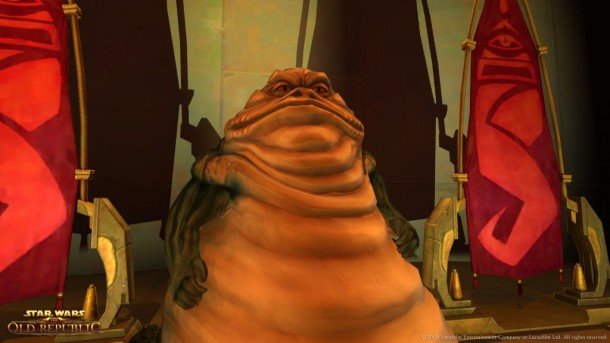 Quests in SWTOR can feature some funny and familiar characters

Quests, or often referred as missions in this game are the core of every MMORP game including SWTOR. There are several types, ranging from the classic “kill X rats” to epic storylines spread across multiple planets.

Possibly the most entertaining quests are those the follow your class storyline: each class has a completely different one. Make sure you always follow your class quests, as they are the source of great experience, as well as items, companions, and ships. 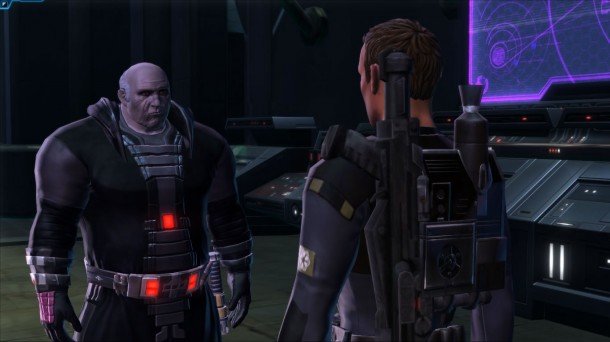 The current level cap is 50. Nothing revolutionary here: by doing missions, killing monsters and participating in PvP you gain experience points, and a set amount of XP brings you to a new level.

Leveling in SWTOR isn’t too difficult overall, as you can hit the level cap in about a week of play time. However, if you do need some help I suggest you check out some leveling guides, as SWTOR doesn’t support any interface addons to help you out.

The Empire is currently the dominant faction in player numbers

There are two main factions or allegiances in Star Wars The Old Republic: Sith Empire and Galactic Republic. If you ever watched a Star Wars movie you’ll know what either is about. You probably already know which faction you want to play, but to put it as simply as possible Sith Empire are the bad guys, and Galactic Republic the good guys. If you want to play the least popular faction, it’s the Republic. Sith Empire is played by nearly 60% of players. 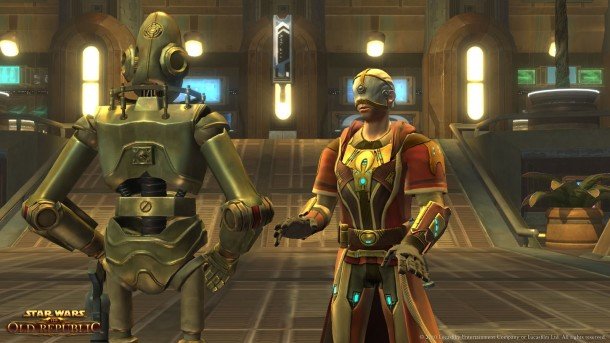 There are 9 playable species you can pick. Not all are available for every class, so make sure to choose wisely. There are no major in-game impacts to the species you play, so most players just go for the one that looks best. 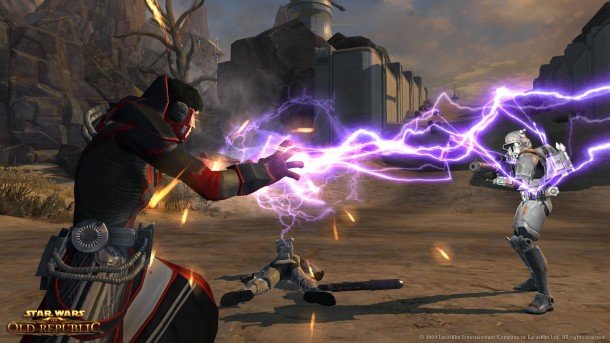 There are eight classes, four for each faction. Trooper, Smuggler, Jedi Knight and Jedi Consular for Republic, and Bounty Hunter, Imperial Agent, Sith Warrior and Sith Inquisitor for The Empire. Every class has personal healing and is more than capable of dealing damage. Each class also has access to two different advanced classes or specializations, which are basically talent trees:

Descriptions are provided just to give you a basic idea of a class role: I suggest you check out some more detailed guides and videos to see exactly how gameplay for each class works.

The following infographic will also give you a good overview on classes in SWTOR: 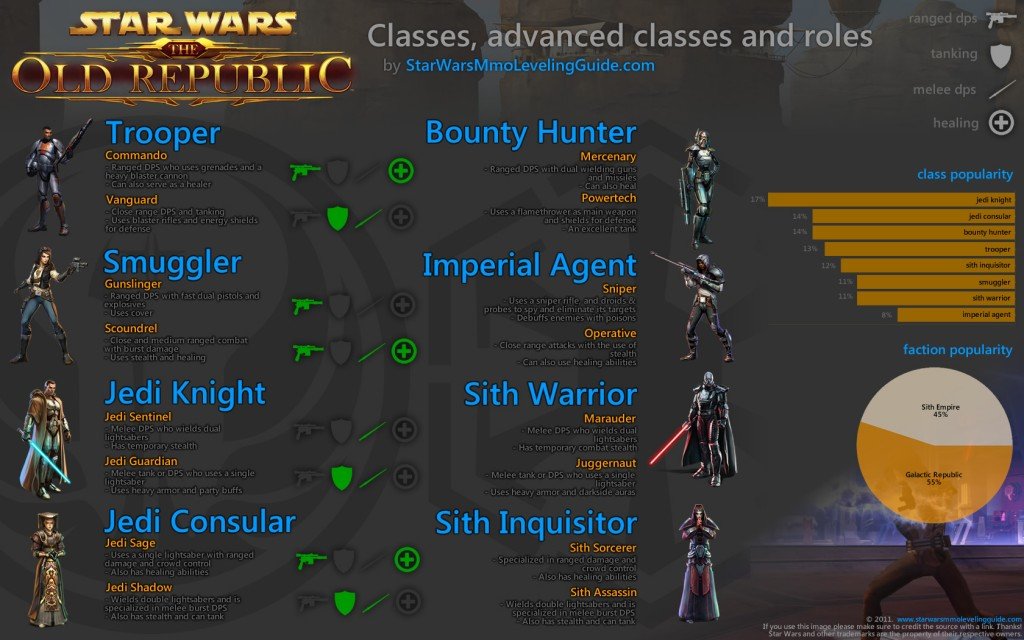 As you may have noticed, classes on each faction are basically mirrors of each other. While generally they have some different abilities and weapons, the gameplay isn’t overall much different. 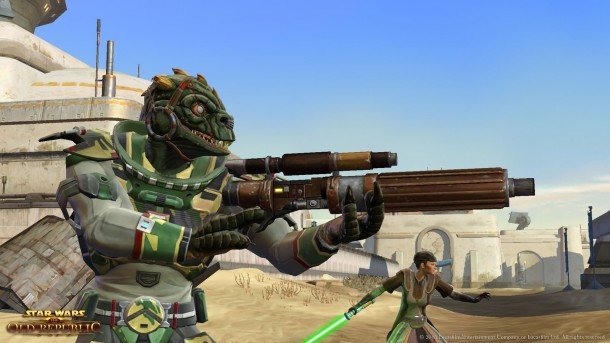 Ever class in Star Wars The Old Republic has five different companions that join them in their adventures. You should get your first companion by the time you hit level 10, and additional ones become available throughout the game.

Companions are basically NPC followers that respond to your commands: they help you fight, gather resources, and you can even send them to do missions. Tip: you can command your companions with a smartphone, which makes leveling crew skills much easier.

Each companion has a place in SWTOR’s lore, and every one has a preference to combat. You can get companions that can tank monsters for you, or do ranged damage, heal you, or a combination of all. It depends on your preference and play style which companion you want to take with you. In the meantime, the others stay on your starship and can be send to do missions on their own, effectively farming resources with almost no effort on your part. 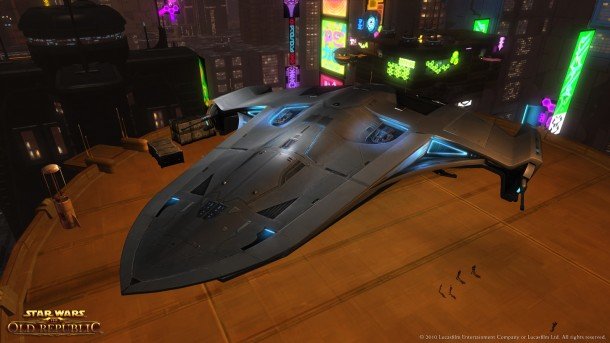 An example of how a starship looks in SWTOR; the pictured X-70B Phantom is available to Imperial Agent players

Of course, there are also starships in SWTOR. While the space combat and space missions aren’t as fun for most players, it’s often a welcome change of pace. Many players find it nice to have a place they can call home, even though it’s just virtual.

Your ship is how you travel through the vast galaxy, and also the place where you do your crafting, and where your companions await your orders. 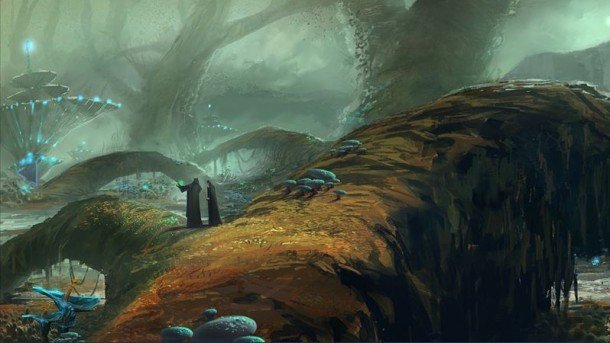 There's a variety of different scenery on each planet in SWTOR. This image shows Belsavis.

Coruscant is the capital planet for The Republic, while Dromund Kaas is capital for The Empire. Bounty Hunter and Imperial Agent classes start on Hutta, Sith Warrior and Sith Inquisitor on Korriban, Trooper and Smuggler on Ord Mantell, and Jedi Knight and Jedi Consular on Tython.

Each planet features unique quests and different scenery and surroundings, which can make for a great experience when you’re starting with a new class.

The Holonet includes detailed lore about each planet, and the following infographic will show you the levels that players get to visit each planet on:

A scene from Boarding Party, one of the available Flashpoints

PvE stands for Player versus Environment. As already mentioned SWTOR mostly consists of doing missions and following the storyline. Other than that there are instances and dungeons in this game of course, and they are called Flashpoints and Operations.

Flashpoints are highly scripted, instanced content which should be done with a full group of players (4). There’s currently over 15 flashpoints available, and some of them are: Esseles, Black Talon, Boarding Party, Taral V and Directive 7. Boarding Party and Black Talon are available to Empire only, and Esseles and Taral V to Republic. Directive 7 can be accesses by both factions. More are being frequently added with various patches.

Flashpoints feature multiple bosses, cutscenes and dialogue options, and depending on which path you choose to take you may be able to finish the instance sooner or later, in addition to obtaining light and dark side points.

Operations are basically raids, designed for 8 and 16 players. Eternity Vault is a well-known one, since it was released along with the game. In SWTOR there are also several world bosses which can only be taken out with a full raid.

More operations are constantly being added with new game patches to expand the content available to players.

The following (yet another) infographic gives you a good overview of the available Flashpoints and Operations and their item drops: 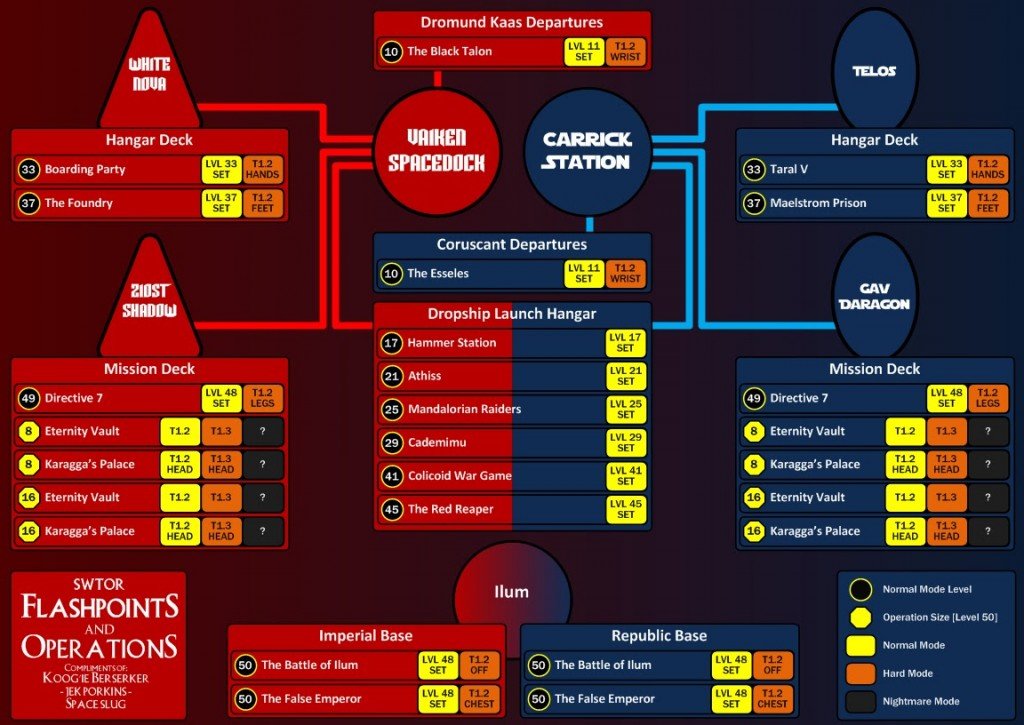 PvP – Player versus Player in The Old Republic is done via two ways: open world PvP and Warzones. Below we’ll take a quick look into both.

Warzones are instanced battlegrounds where you can fight players of the other faction. There are three different warzones currently: Alderaan, Voidstar, Huttball and Novare Coast.

You can read a bit more on the official site’s Warzones section.

After your faction’s capital planet (Coruscant for Republic, Dromund Kaas for Empire) you’ll start getting into fights with the opposing players, assuming you’re on a PvP server.

There’s also Ilum, a level 50 planet which is where you’ll find some high-level Operations, and more importantly mass PvP, which is roughly on half of this planet. A hundred players or more can participate in this zone-wide control of certain key points which are required for victory.

There are several rewards to participating in PvP, besides the ego boost from kicking ass of the opposing faction. First of all, you gain experience, meaning if you wish you could level up just in Warzones. Second, you get credits. Third and fourth, you get Valor and Commendations. Valor gives you character titles, “leader” status in Warzones and such: it’s basically a ranking system. 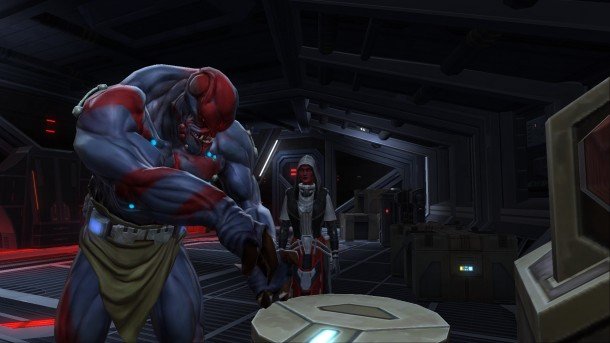 Your companions can craft items for you

In The Old Republic professions and tradeskills are called Crew Skills. There are three main categories: Crafting, Gathering and Mission skills. At one time you can only have 1 crafting skill, and choose either one of each gathering and mission skills or two mission or two gathering skills, for a total of 3 crew skills.

You can take any crew skill you like on any class, but you’ll want to pick them according to the class you play, but also your personal preference. The info below will attempt to explain which crew skills are best to take depending on your class and advanced class choice.

Hopefully this makes your choices a bit easier. You can find a very detailed crafting guide here which will help explain what each crew skill is about. Even though it’s not nearly as in depth, the official page gives a decent basic overview of crew skills as well, and if you’re looking to find the ones that are most profitable you might want to look at this blog.

I do hope this post gave you a bit of information about Star Wars: The Old Republic’s basics so you’ll be a bit more knowledgeable about the game if you decide to play it. If you know any additional good resources or information I could add to this beginners guide be sure to let me know in the comments below.

Users tagged this with:

Previous post: Writing Wedding Speeches Is Not Nearly As Scary As Giving It